To share your memory on the wall of Clair Hawn, sign in using one of the following options:

With sorrow we announce our father’s passing at 94 after a brief illness at Joseph Brant Hospital in Burlington. Clair had recently been united with his wife Gwen at CAMA Woodlands ... Read More
December 30, 1924 - April 10, 2019
WWII Veteran

With sorrow we announce our father’s passing at 94 after a brief illness at Joseph Brant Hospital in Burlington. Clair had recently been united with his wife Gwen at CAMA Woodlands Nursing Home after a 2 year separation. We are so happy they were able to enjoy a few weeks together having been married for 70 years.
Clair was born in Newington, Ontario on December 30, 1924. He was the youngest son of his late parents Lucy and Merrick Hawn, and predeceased by brothers, Orace, Carl, Royal, Donald and sister Audrey.
Cherished father of Rob, Paul, Shelley and Jennifer. He will be fondly remembered by their partners, grandchildren and many nieces, nephews, and friends.
Clair proudly served in WWII, enlisting at age 16 in order to follow his brothers into service. He was promptly sent home for lying about his age. He then re-enlisted at age 18 and served overseas for 2 years.
Clair was a devoted husband, proud father and a loving grandparent. A strong and muscular man, he always believed in hard work and was also a dedicated employee. He was especially proud to have worked on the Avro Arrow.
The family will receive friends at Smith’s Funeral Home, 1167 Guelph Line, Burlington, Ontario, April 12, 2019 from 7-9 pm. A service will be held there in the chapel on Saturday, April 13 at 10 am. Light fare and refreshments to follow. Interment in Streetsville to follow at a later date. In lieu of flowers, donations to Veterans Canada would be appreciated by the family.
Read Less

Receive notifications about information and event scheduling for Clair

We encourage you to share your most beloved memories of Clair here, so that the family and other loved ones can always see it. You can upload cherished photographs, or share your favorite stories, and can even comment on those shared by others.

Posted Apr 15, 2019 at 06:37am
Our condolences to the Hawn family. Mr. Hawn was our neighbor for decades in the early days. He was the type of neighbor everyone hopes for; kind, friendly, caring...and handy. There was nothing that Clair couldn't do: automotive repair, body work, carpentry, brick laying, boating. After a work day, you would find him in his garage, working on something, for someone. There was always a project on the go.

His infectious laugh (he had the best laugh) his kind, gentle demeanour, and his willingness to assist, are all memories imprinted on me. His love of hockey, and Sunday nights in Winter spent at the freezing Dixie Gardens Arena supporting the local Junior B Dixie Bees is also a memory I will treasure forever. As will his love of driving and maintaining vintage Oldsmobiles.

Clair and Gwen valued friendship and maintaining relationships. They would stop in and visit us annually long after we moved away. What a great couple, and Clair was quite simply, a rock solid good man and family friend.
Comment Share
Share via:
KB

Posted Apr 13, 2019 at 09:06am
To all of the Hawn family: So saddened to hear of Clair’s passing. He was one of the best neighbours ever. He sure loved his boats and cars. We will always remember his hearty laugh. Our love to you all, Norma and Ron
Comment Share
Share via: 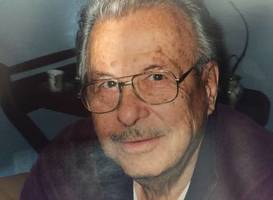